"The unread story is not a story; it is little black marks on wood pulp.

The reader, reading it, makes it live: a live thing, a story."

Awakening Worlds is an eco-fantasy about the perils of human supremacy and the destiny of planet Earth.

Venus (a.k.a. Roselyn), sister of the unborn Earth, is sent to the human world by her mother, the Universe, to protect a child in possession of the new spirit of Earth. If all goes to plan, she will save her sister. But, she must save her before humankind destroys her!

"This fantasy novel simply blew me away! Well-written, with lyrical prose reminiscent of Dylan Thomas, it tells the story of a race to save the Earth from dying. The green message is not in the least preachy, though: it's wrapped up in a fable where the Universe sends the Earth's spiritual sister, Roselyn, to guide the one woman who can save the planet. As well as the sheer delight of the description of Roselyn's journey, there are humorous moments as Roselyn has to disguise herself as a man to achieve her aims. Tense, fantastical and spiritual, the story feels like a big warm hug. And we'd all like one of those, right?"

"Hugely imaginative and thought-provoking debut novel from J.C. Thomas. Thomas navigates the landscape of this high concept novel with deftness and ease, which is a triumph for a book that explores the perils of climate change, and the importance of respecting our place in the universe by keeping rhythm with Earth, not fighting against her music. There is a transporting sense of place, recognisable realism to the dialogue, and beautifully descriptive passages that capture the sheer magnitude of the universe, thanks to Thomas's magical use of imagery. Throughout the novel, a true state of urgency is maintained; making the book incredibly engaging as you race to the finish to discover the fate of Earth, herself."

"A very clever and exquisitely written story, "Awakening Worlds" is a modern climate change fairytale. Roselyn, the spirit of Venus, is tasked with saving the Earth from the ravages of Man. As oil slicks pollute the oceans and cities gobble up green fields, Roselyn is in a race against time to find the Earth's spirit and help the planet survive. If Roselyn fails, the Earth and all humans will die. Fantastical and allegorical, with biblical allusions (Roselyn descends to the Earth as a magical bird and the Earth's spirit must have a pure soul), every page in the book is a delight to read."

"Thoroughly enjoyed every page. Very well written and imaginative story with an important underlying message. I would strongly recommend this book to everybody.”

"Thought provoking, inspiring, a great little read on the train. Hopefully a good catalyst to influence how we treat our planet."

"Excellent debut from this author. A well-crafted narrative which deftly meets the challenge of drawing rounded characters and storyline while also asking profound questions about our relationship with our planet. Accessible and thought-provoking in equal measure."

MA Dissertation: Imagining the Dragon in the Anthropocene: A Vision of Embryogensis

A collection of illustrated poems

"I thoroughly enjoyed this book. Wonderful illustrations, too. An excellent portrayal of family life in the twentieth century. I would highly recommend this book as a great way to escape modern life." 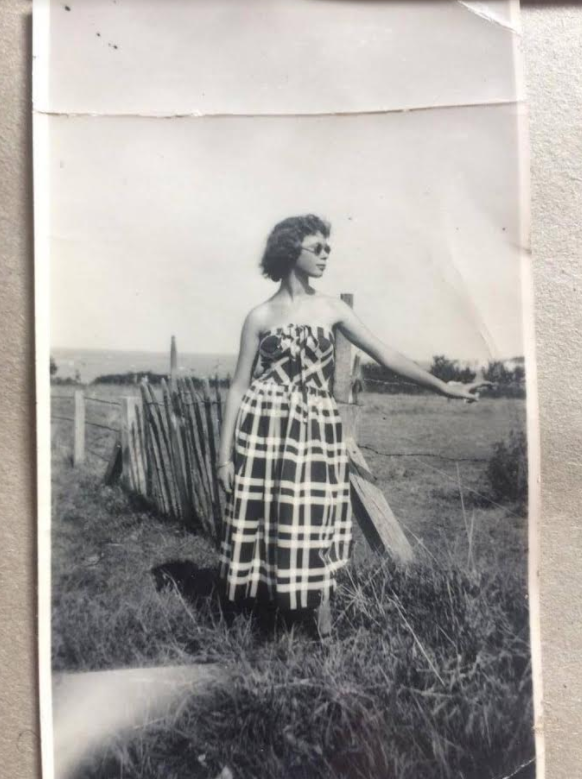 Behind the Poems with Mary Pilcher: Conversations on Life, Art, Love, and Poetry.

Collisville (The Reunion) | a novella

“The Earth is a self-organising process of astounding complexity and achievement. It's a matter of intimacy: the closer we get to an understanding of the dynamism of the integral Earth, the more obvious it becomes that the four and a half billion years of terrestrial evolution resembles one vast embryogenesis. Something is developing, hatching, unfolding, and we are the self-reflexive mind and heart of the whole process.”

Creation said, “I want to hide something from the humans until they are ready for it. It is the realization that they create their own reality.”

The eagle said, “Give it to me. I will take it to the moon.”

The Creator said, “No. One day they will go there and find it.”

The salmon said, “I will bury it on the bottom of the ocean.”

The Creator said, “No. They will go there, too.”

The buffalo said, “I will bury it on the Great Plains.”

The Creator said, “They will cut into the skin of the earth and find it even there.”

Grandmother who lives in the breast of Mother Earth, and who has no physical eyes but sees with spiritual eyes, said “Put it inside of them.”

And the Creator said, “It is done.”

If you live outside EU or USA

When Roselyn, daughter of the universe, learns humanity’s growing disregard for Earth’s health is putting her mother’s life in danger, she volunteers to nurture a new spirit for the planet’s rebirth.

Roselyn arrives fresh from the world of ancient sunlight in 1784, and she soon discerns that human life is dispensable if she is to succeed in fulfilling the prophecy of the next world.

Roselyn’s actions are not as compassionate as one might expect from a goddess born from the planet Venus.

But when Roselyn finds the spirit of Earth growing inside a young girl whose parents have hidden her away from the world, she finds herself feeling more compassionate—and more human—than she ever thought possible.

A World between Worlds (before my novel became Awakening Worlds). 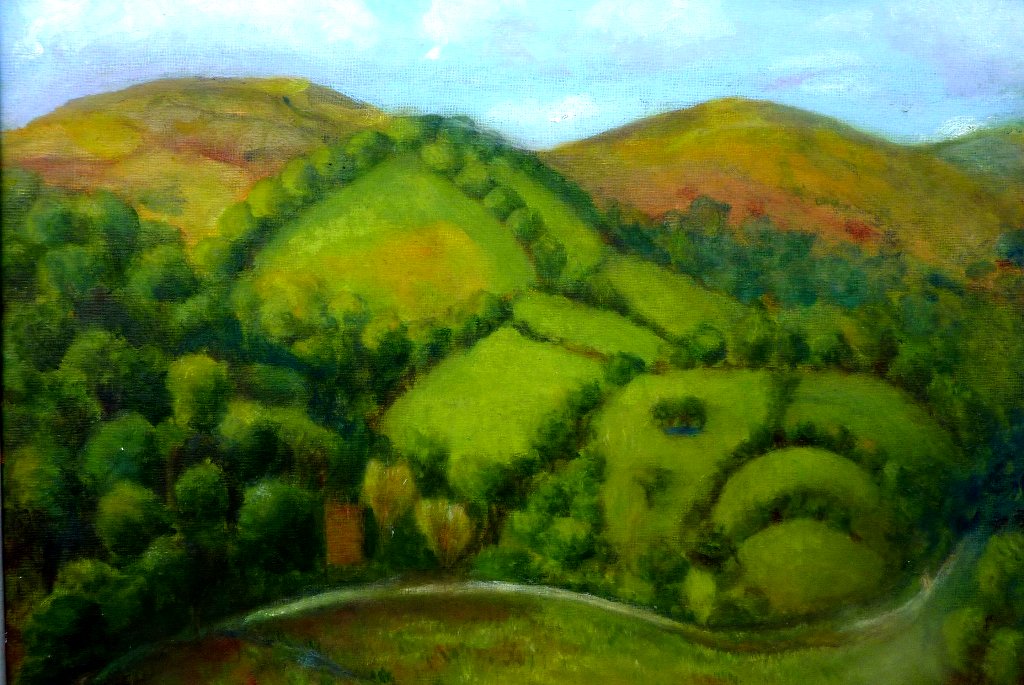 © Artwork by my mum, Sara Pilcher. 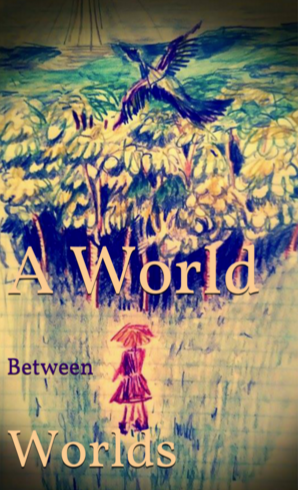 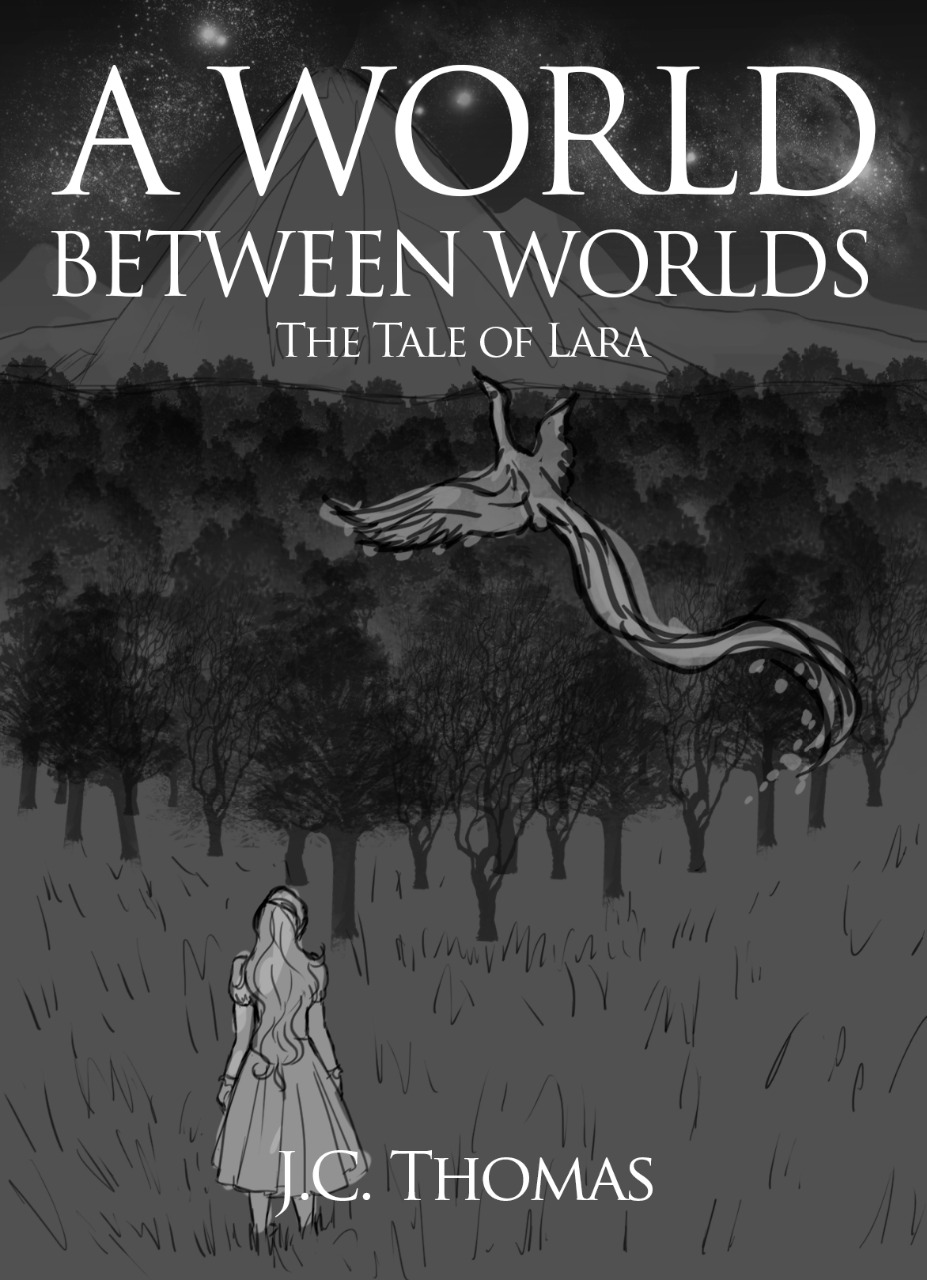 A little bit about me...

Awakening Worlds is an eco-fantasy novel. It has also been described as a modern climate change fairytale. In Awakening Worlds, you will encounter a speculative concept on the spiritual destiny of the earth.

I grew up on the edge of the Exmoor National Park in West Somerset, where the power of the elements shaped my imagination and formed my understanding of the importance of the natural world.

I graduated with a BA (Hons) in English Literature from the University of the West of England in 2011. I spent two semesters abroad at Virginia Commonwealth University in Richmond, USA. This is where I began writing a story about my ideas on earth-based spirituality. The words came to me like the comet, or spirit, that I was trying to describe.

I don't know... Maybe inspiration came in the form of the double shot can of Nespresso iced coffee that I relied on to get me through those 'Bible as Literature' evening classes (a fascinating course, by the way, but 2 hours and 40 minutes felt like an eternity). I certainly experienced an a-ha moment in that class in early October 2009, when the ideas clicked into place and my book began to reveal itself to my imagination.

I recently graduated with an MA in Comparative Literatures and Cultures from the University of Bristol. In my dissertation, I wrote about the cross-cultural figure of the dragon in ancient myth and culture in relation to contemporary ecology and environmental philosophy.

During my travels, I volunteered at Minmahaw School, an incredible education organisation for disadvantaged Burmese youth. There, I led a creative writing and drama workshop. I have also worked as a teaching assistant at Wulungarra Community School, an Aboriginal school in the Kimberley desert, Western Australia.

All that she will remember are the sensations. Shrinking through a hole the size of a needle’s eye like the last grain of sand that slips through the body of an hourglass. Twisting through the shifting fields of space, a golden thread repairing a rip in sacred material. A host of bright white beams pierce the darkness, striking the ocean like shards of glass. She longs to reach her destination and meet her future self. She will heal the scarred flesh and wake the unconscious.

Her tail is a river of fire that stretches beyond her ethereal body. She breaks through the fragile surface of the atmosphere, igniting a gentle light. Golden vapour spirals in crystal formations towards Earth. What is left of her is the essence, her spirit exposed and falling with precision like a hunter’s bullet.

She sees the beautiful creature of blue and green. She absorbs the magnificent sight in one momentary flash. She observes the steady curve in the horizon and the white-peaked mountains that form the spine of a baby that sleeps curled in a ball. The blue blood flows in rivers from its spine to its azure heart and rises as vapour, moved by the breath of the powerful green lungs. Earth’s atmosphere glows with vapour turned gold by the sun, and she absorbs the warmth. She breathes freely for the first time in her memory. She dances, effervescing through golden kingdoms in the sky.

In a forest where pine needles prick the black sky and fall like stars to the ground and the tall trees whisper to the vast, dark wilderness, she feels the urgency of water as it rushes around her body. She turns light and liquid into life, and the air around her forms a shield that reflects the raw sun. She glows, orb-like and spherical with fossils encrusted to her resilient flesh. They shine like jewels.

She sleeps in the deep vein of dreams while amid a sea of life, it begins. She waits, magnetised in space. She feels her mother all around her. She feels her heartbeat. 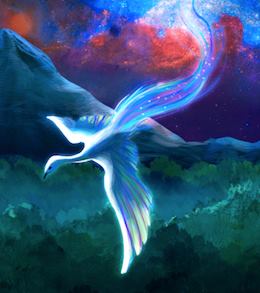 A collection of illustrated poems . . .

Brought to you by Opposable Thumbs Publishing.

"I thoroughly enjoyed this book. Wonderful illustrations, too. An excellent portrayal of family life in the twentieth century. I would highly recommend this book as a great way to escape modern life."